Rick Stanton, Cave diver and photographer from the UK, will be speaking and showing film at the March clubnight, Thursday 15th March 7.30pm. 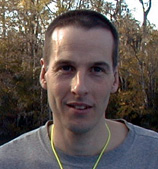 Rick is on his way to OZTeK'07. He is known for cave diving in France and has spoken at the Royal Geographical Society.

In cave diving there are two different worlds. There are technical divers who dive in flooded caves and rarely leave the water, and then there are cavers who dive but treat the flooded section as a barrier to finding more dry cave. Rick Stanton is a rarity, indeed - he is at the top of both disciplines.

Stanton, a fireman from Coventry, has time and again exhibited a knack for pushing beyond the points at which others have declared a cave to have ended. Developing his own side-mounted mixed-gas rebreathers, along with diving partner John Volanthen, he recently made major advances at Wookey Hole in Somerset. He pushed on through gravel squeezes previously considered to be impassable at depths in excess of 70m. His quiet and confident nature made him the ideal diver to lead the rescue of six stranded cavers from a flooded cave in Mexico last year, persuading one of the cavers who was scared of water to make a 180m dive out of the cave!

In continental cave diving circles he has quietly shown the rest of the world the way in their own back yards. Typical have been his dives at the popular site of Emergence de Ressel in southern France. This river bed cave was thoroughly explored in 1990 by the extraordinary Swiss solo cave diver Olivier Isler, who reached a dry cave section. Unable to remove his triple-circuit rebreather system unaided, Olivier swam back, declaring that he thought it unlikely the 2km long, 80m deep sump would ever be passed. using open-circuit equipment.

Nine years later, Stanton and diving partner Jason Mallinson made an epic five-hour inward dive followed by a six-hour outward dive, all using open-circuit equipment. In the process, he explored hundreds of metres of dry cave passages to a further sump. When Rick says something is impassable you can bet it probably is!